It seems that each year just keeps getting busier than the next – and this one’s been no different!

Hampshire back to our home state of Florida, and boy does it feel good! The sunshine, the sea air, and salt on margaritas instead of driveways (who can argue with that?).

After years of having no window in my kitchen and an office that overlooked the driveway, the first thing I did was plant a butterfly garden. I’ve only broken two dishes so far, and only one resulted in an injury needing medical attention, so it’s definitely been

worth it. (The pup’s definition of irony – when the human plants a garden so they can chase butterflies, then yells at him for chasing the butterflies. Pursuing a butterfly with a camera versus fangs is simply a lack of fun on the human’s part.)

I turned a new leaf in my writing and started penning YA mysteries! It was a plot twist I didn’t see coming (but should have). My first is finished and currently in the query process. My second is just around the halfway point of the first draft, and I’ve got more ideas than I could possibly develop, so I think I may have found my new niche! (Which means all the adult manuscripts I’ve written over the years may turn up free on Amazon – if you’re interested, sign up for my newsletter.)

I’m just about back in the groove of things, so regular blogging should recommence soon.

For those of you who don’t know, my main website www.shannonhollinger.com is no longer on WordPress. Stop by and check out the new look or sign-up for my newsletter so you don’t miss any important updates. Better yet, do both!

Most of the great loves of my life have been dogs.

Big, little, smooth, wiry, I’ve been blessed to have shared my life with a number of exceptional pups. I love cats, too, but they just can’t melt my heart like a smile from a dog can.

Ten and a half years ago, I was living by myself in an apartment in a new town, trolling the internet one night, when I saw the sweetest face. Her worried look broke my heart. I wanted to find this pup and fill her life with smiles. Was it kismet that she was in a shelter just half an hour from my parents? I think it was.

I got my arms around the little fireball and named her Tempest – an apt name for a pup whose eyes never seemed to shut.

I’m not going to lie – our time together wasn’t always perfect. We got off to a rather rocky start. I’d belonged to a couple of wire haired fox terriers growing up. I knew terriers had strong personalities and a ton of energy, I love that about them, but this wiry, tall Jack Russell was a handful. She was completely feral.  We had to start from scratch, from sit to stay to please keep your over-sized fangs off my face.

I called my parents, locked in a bathroom, bleeding and crying, more than once. I Googled options for getting an exorcism performed on a dog a few times. But with time, effort, a ton of exercise and a tube of Neosporin, we grew to understand each other, and my little Tasmanian Devil became the most affectionate pup I’ve every met. She’d give kisses for hours if your skin could take it.

We adopted a brother for her, and later, a husband, who we shared (My name might be on the marriage license, but he proposed to her years before me. Not that I blame him. 😉 ).

I was incredibly lucky – I’ve never seen two dogs love each other more than she and Sullivan, and ‘our’ husband absolutely adored her and gladly accepted hours of kisses every night.

If you’ve noticed that my blog has been silent for a while, it’s because I was focusing my efforts on caring for her. She was the strongest, bravest, toughest dog I’ve ever known, living each day to the fullest, filling the hours with kisses and playing despite the tumor that had absorbed her cerebellum and continued to take over her brain.

I would have gladly cared for her forever. The time to say goodbye came much too soon. Every day I wonder if we should have waited longer, if I should have waited until there was a second bad day instead of making the decision the first one, but one morning she refused food, had no energy, didn’t want to move, showed signs of pain, didn’t smile and avoided eye contact. 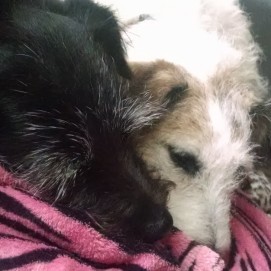 I knew what the sudden, drastic change in behavior meant. There was no chance of her getting better. And as much as I second guess myself, I know that the best way I could show my love for her was to sacrifice the time I could have kept her going by setting her free instead of forcing her to endure pain, suffering, and an increasing lack of independence, torturing her for my own selfishness.

I’d like to think that, for the most part, we succeeded in giving her the life she deserved. She had the most beautiful smile. She was so full of life. She had endless love to give. She would laugh both at you and with you, she loved showing off, she liked being silly. She was sassy, demanding, difficult, and shed like nothing I’ve ever seen before – she was wonderful.

Missing her is hard, but loving her was so incredibly easy – and worth every second.

Some of these are so funny, I had to share – they can’t help but bring you some holiday cheer!  😛        Season’s Greetings!

Most couples (I think) do something special for their anniversary. An evening out, a romantic getaway, something relaxing. For our anniversary, my husband and I built a fence.

The fence was something that I really wanted, and had wanted
for a long time. The fence would free up so much time and alleviate so much frustration, because the fence would be used to create a yard where I could let the dogs out to play. Never again would I have to chase a naughty Jack Russell around the house until I managed to corner her and get her harness on several times a day. No longer would my elbow get wrenched, my shoulder get yanked out of its socket, or my neck be violently snapped while being 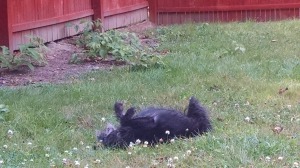 jerked around by a care bear schnauzer turned raging hellhound, the mere step over the threshold triggering a Jekyll-Hyde change. I would be free!!!!!!

Neither of us had ever put up a fence before, and it seemed a bit daunting. So much so, in fact, that we actually got quotes to see how much it would cost to pay someone else to do it. When the labor estimates came back at over three times the cost of materials, it really should of told us something (like how much fun erecting a fence really is).

Let me start by saying that they don’t call New Hampshire the granite state for nothing. Every time one of us drove the post hole digger into the ground for our next 4×4 – clink. Every. Single. Time. Sometimes it was small rocks that we could dig up. Sometimes we dug up big rocks. And sometimes, after revealing enough of our underground foe to discover that is was a boulder way too big to remove, we were forced to get creative. So maybe a few fence panels don’t have posts at the very end. Maybe we had to buy a few extra 4x4s to support the fence wherever we could get them into the ground. At the end of the day, (actually, two), we got the job done. It took us a third day to get the fence stained.

Now the dogs have a great yard to run free and play in and I have the luxury of reading while they get their fresh air and sunshine (they still have to be supervised). It was a fantastic anniversary present, and best of all, we spent quality time working together to achieve our end goal. Next year, I’m thinking we’ll build a garage. 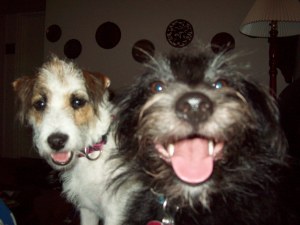 They come racing full speed ahead to greet me, their furry little bodies bouncing off each other as they vie for the lead. Rearing as they nip and paw at each other for the right to welcome me first. Sliding to a halt in front of me, nuzzling my hands, demanding the attention they deserve. My pups are wild ponies.

My little ponies constantly race around the house frolicking, wrestling, teasing each other with toys. I love when I’m down in the basement and I can hear their thundering stampede dashing about overhead like a herd of wild oxen. Or when I take them hiking and they dart about like little wolves, sniffing, searching, stalking down their prey.

Tempest and Sullivan are the sweetest Terrier Terrorists you’ll ever meet. A combined 50 pounds of nub wagging, wiggling joy. Sometimes they’re just plain savage with their over exuberant affection and insatiable demands for attention. They’ll lick your skin raw if you let them. 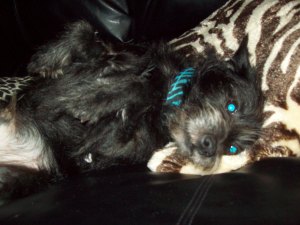 Puppy love is not always easy. They’re a big responsibility, and, like children, you have to put them and their needs first. There are days when their needs and demands are overwhelming. Times when you’d like to go somewhere or do something, but you can’t because you have to get home and walk the pups, or you can’t leave them home along that long. But they do make life better, happier, and at times even easier.

Both Tempest and Sullivan are rescue pups. Tempe is a tall, wild haired Jack Russell with the characteristic terrier personality – complete with the big attitude and intelligence. Sully is a…..special blend. Very sweet, good-natured and agreeable. Knowing a dog’s breed can be important in educating the owner about potential health (and behavioral) issues, so I had his DNA tested. My little man is half Schnauzer, quarter bull-dog, and 1/8 both Dachshund and Pomeranian. But they’re both 100% adorable.

I’m a huge advocate of adoption. There are shelters all across the country teeming with animals waiting for a good home. Large and small, young and old, pure breeds and mixes…..there’s a perfect match out there for every one if you take the time to look. And I hope you do. 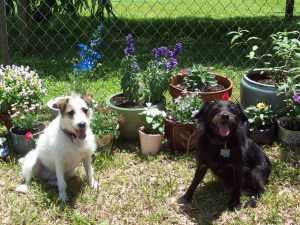